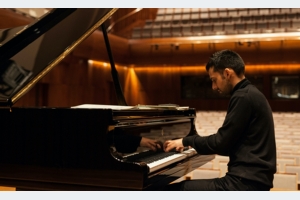 A Baroque Suite with works by D’Anglebert, Scarlatti & Bach

A BBC Music Magazine Rising Star in 2021, pianist Alexander Soares has been praised for his performances that are “brilliantly unbuttoned” (The Sunday Times) with playing of “huge intensity” (The Telegraph) and “diamond clarity and authority” (BBC Radio 3). He came to international attention in 2015 when he won the Gold Medal in the prestigious Royal Overseas League Competition and was selected as a solo artist by City Music Foundation. In 2019 he released his debut solo album Notations & Sketches and two years later, his second solo CD – Threnodies. “Soares is in his element again, conveying the immensity of the emotional journey” (Gramophone). He combines a busy and varied performing schedule with doctoral supervision at Guildhall School of Music & Drama, and research of musical memorisation. www.alexander-soares.com

Become a member today and save 25% on ticket prices!