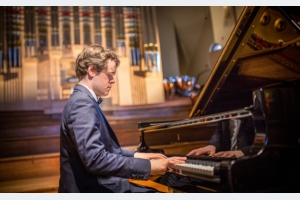 Winner of the Keyboard Final of the 2004 BBC Young Musician Competition at the age of eleven, Benjamin Grosvenor is now an internationally regarded pianist performing with esteemed conductors and orchestras across the world. A BBC New Generation Artist from 2010-2012 Benjamin has performed at the BBC Proms on a number of occasions and in 2015 starred at the Last Night. Exclusively signed to Decca Classics, the youngest British musician to do so, his recordings have received numerous awards and in October 2016 he was announced as the inaugural recipient of the Ronny and Lawrence Ackman Classical Piano Prize at the New York Philharmonic. Playing since the age of six, Benjamin graduated from the Royal Academy of Music in 2012 with the ‘Queen’s Commendation for Excellence’