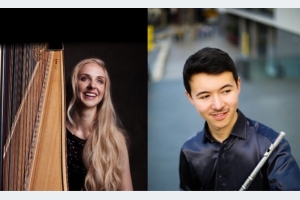 Presenting a programme full of passion, storytelling and dreamlike soundscapes, Elizabeth Bass (harp) and Dan Shao (flute) will explore the full range of expressive capabilities of their instruments through immense timbral variation and rhythmic flair. Elizabeth Bass was the first British musician to reach the final of the USA Harp Competition, where she was awarded the Silver Medal. She has also won other prestigious awards and performed solo concerts in the Royal Albert Hall, Birmingham Town Hall and St John’s Smith Square. Dan Shao’s flute playing has been described as “shapely and silvery” (Classical Source, 2017) and possessing “virtuosity, charm, and charisma in abundance” (The Telegraph, 2014).

Become a member today and save 25% on ticket prices!