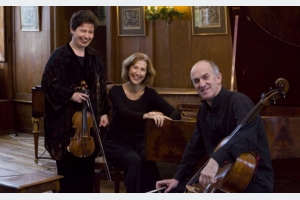 Trio Goya play Classical chamber music on period instruments. Formed out of a collective fascination with the new colours and narratives that these instruments suggest, the group concentrates its repertoire on the trios by Haydn, Mozart and Beethoven. A fortepiano by Paul McNulty after Anton Walter, Vienna 1795, is the centrepiece of this music.

Released initially as a download, their recording of Haydn trios,"The Heart of Invention" was released on Chandos Records in June 2010. A preview of this can be heard on the "taste of Haydn" page or by linking to www.bowers-wilkins.co.uk

Trio Goya are pleased to announce that their recording of the three Beethoven opus 1 trios (recorded at Snape Maltings in November 2017) will be released on Chandos Records in July 2018.

Trio Goya's London appearances include a sell-out Wigmore concert and a rapturously received Kings Place concert in which they were joined by viola player James Boyd in piano quartets by Mozart and Beethoven.