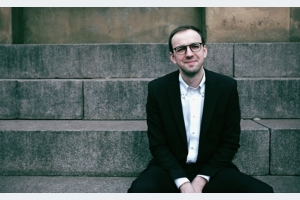 B. Dvarionas 'The first snowflakes' from the Pieces for Piano 'Winter Sketches'

Scherzo no.2 in b-flat minors

“He is an astonishing talent and a clear winner...”

One of the leading pianists of Lithuania’s new generation, Ugnius Pauliukonis has been performing professionally since the age of six. He has won numerous awards, including RNCM Gold Medal (first ever solo recipient), the Schubert and Mark Ray Prizes, the Recital Prize and a prize at the International Amy Brant Piano Competition in Birmingham. Most recently, Ugnius was awarded with the Silver Medal Award for excellence in performances by the Worshipful Musicians Company UK, as well as PDG Young Artist award from Music Making UK for 2018-2020.

As a soloist Ugnius has played with many orchestras including the BBC Philharmonic and the Lithuanian National Symphony Orchestra. He has given solos in venues such as the Wigmore Hall and the Bridgewater Hall in Manchester.